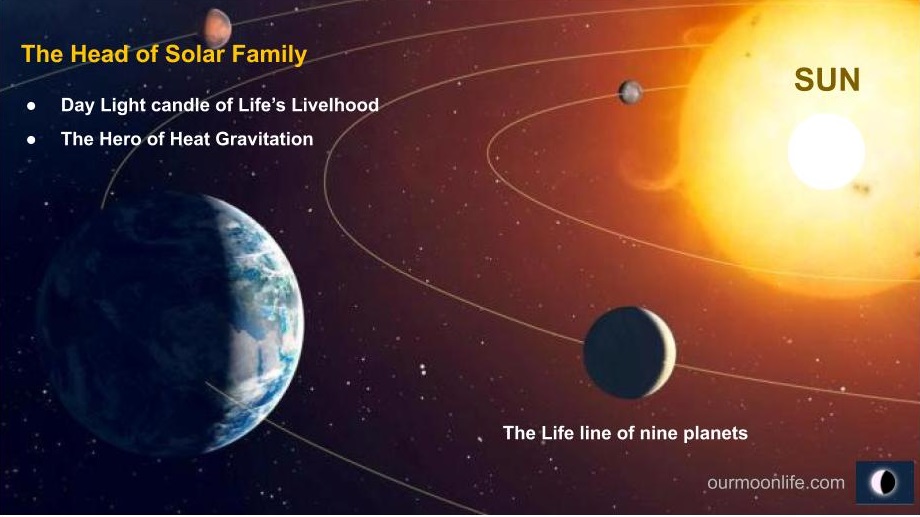 This Universe we live in, is observed to be open and expansive in a very huge size. This Universe has uncountable Stars, Planets contained within it. Adding to it, it is formed to be with 5 type magnificent formation Space, Heat, Air, Water, Soil. In this Grand Universe formation filled with Brightness – & – Darkness, to see it’s structure millions of eyes are not enough – not enough, is the state in which it has formed to be.

Sun has formed to be a formation that gives Heat – & – Light to every planets that come in contact around it. Adding to it, on all sides of the planet (Inner – Outer, Upper – Lower, Around), it carries the job of organizing the Heat correction. That is, to operate the Heat Correction, the water is evaporated and with the help of air, it is being taken to all sides of the planets.

Though all planets have the nature of glowing, only with the Nature of Sun light, the day time is formed.

Light's Nature
Every Planets have the nature of Glowing.

In the Solar Family, 9 Planets has formed to be in abundance of unique specialty (greatness).

The Moon within the Solar system: Will it utilize Solar heat gravity for life’s livelihood?

The Heat gravity of the Sun: “Will it be different between the planets in the Solar System?”

The Perspective of the Cold gravity happenings in the Solar System