When the Correction on the Moon is coming to a fulfillment the changes that happen on Earth shown in the clock changes to the Earth clock.

Sri Sivamathi M. Mathiyalagan, Moon Researcher - Universe Science. / July 31, 2019
Moon Time chart We know that Moon is a light giving planetary body. Moon's light is not seen in the day. We think the reason for it is, that the nature of Sun's light is of higher brightness than the Moon's light. do we know that, in truth it is not so? Moon exposes it's light nature only in the night, this is required to be known. That is, in the similar way that the Sun exposes light only in the day, the Moon exposes light only in the night. This is required to be known. The light that exposes on the Moon during the night time, when it spreads on the surface of the Earth, it is seen as all brightness on Earth. Hence on Earth light happens through Sun on the Day and through Moon in the night. The light we see in the night on Earth, the methods of making use of it and the ways of using the Moon phases (New Moon, Waxing Moon, Full Moon, Waning Moon) for livelihood formations, all such things comes to existence depending on the Moon's rotational function, Earth's rotational function, Sun's rotational function. Hence the current happenings are continuously been known by us previously. Now on the Moon, after creating natural structure's correction methods and after the happening of creating the human livelihood structure, then through the changes that happen on the Moon, the nature of the outer (the happening of light given during the night on Moon) light exposed in the night is being published as chart. "Since Moon's rotational function is to happen within 28:00 hours, we are publishing it here" Chart: We are explaining the 6 types of sections in the time periods of the 28:00 hour time on Moon. 6 types of time period: 1. New Moon 2. Waxing Moon 3. Full Moon 4. Waning Moon 5. Complete Darkness 6. Day such are the time periods we are showing through the split up. 6 timer periods Total time: The periodic clock (28:00 hour time period) that shows the time periods of the Moon has been created. From the periodic clock of the Moon we are describing the total time belonging to each time periods. hence we are publishing that it will be 28:00 hour day-night on the Moon. Adding to it, we are publishing the times in which New Moon, Waxing Moon, Full Moon, Waning Moon, Complete Darkness will be available in the night. Moon Phases start time, fulfillment time: In the state of Moon's correction, within the 28:00 hour time every single phases of the moon, the total time period belonging to each phases, the hour - minute belonging to each phases can be known with clarity. 1. New Moon: After the correction stage of the Moon's livelihood, every day New Moon phase's total time is 02 hour 18 minutes. As per the Moon periodic clock's time, it starts from 21:00 hour and continues till 23 hour 18 minutes. 2. Waxing Moon: After the correction stage of the Moon's livelihood, every day Waxing Moon   Chart I: 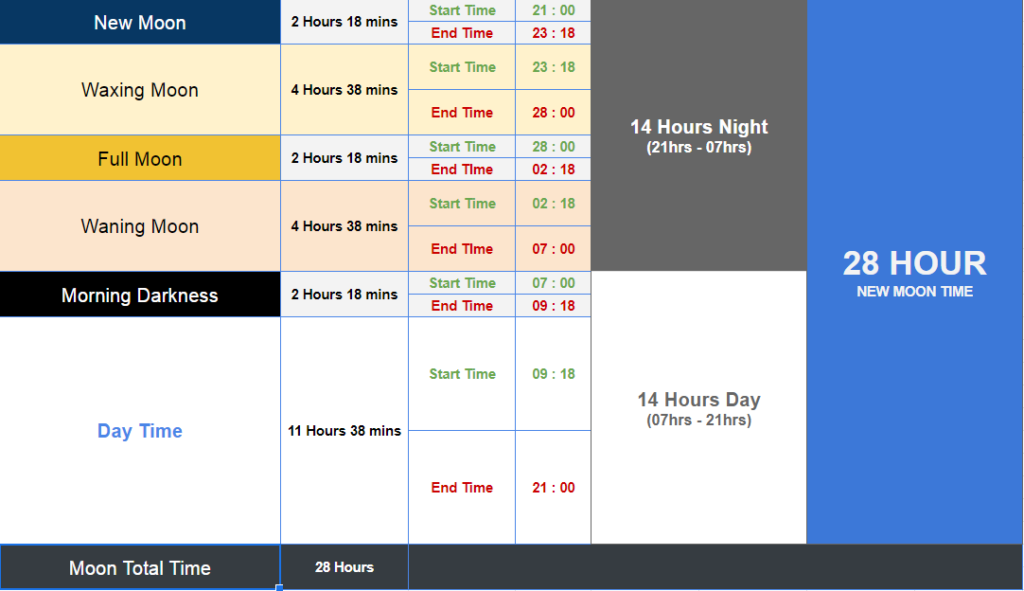 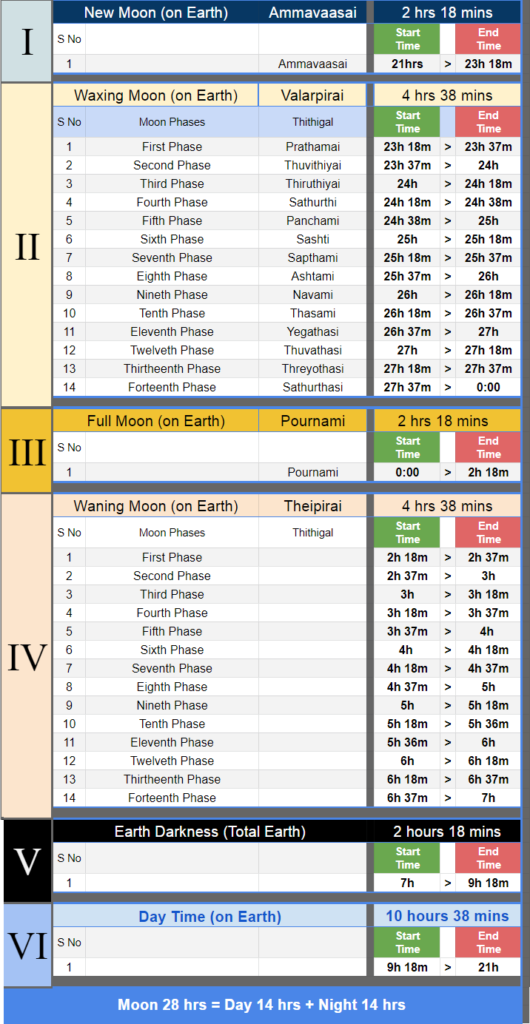 To see the Clock that spins in a normal speed - Click Here ...