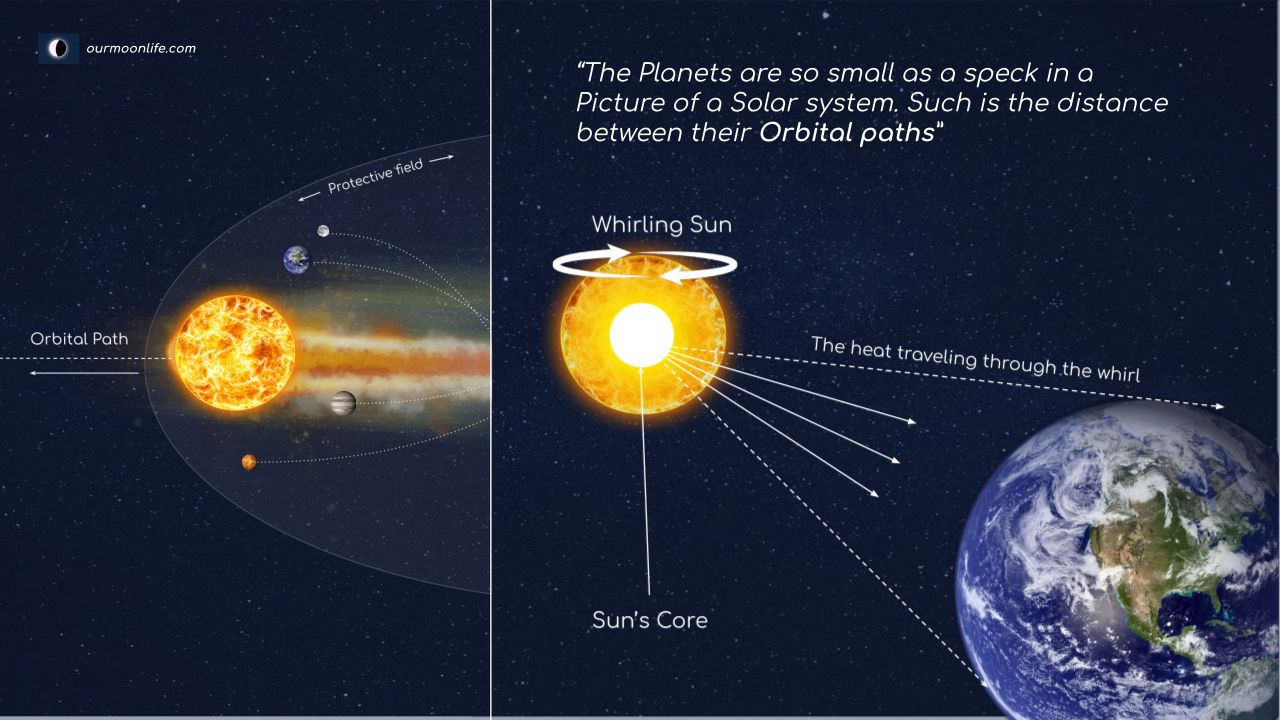 In this Universe we are living in, there are innumerable planets. Adding onto it, the Universe where we are continuing to live, is made of the 5 Grand elemental unificative formations. The five of the 5 Grand elements as well, along with the innumerable planets are whirling through the Protective field structure under the Universe gravity with the support of the Universe’s core axis and as well with the planets’ core axis support. Every planets that are whirling around in the Gravity like that, is functioning with the support of ‘5 Grand elemental heat gravity’ and Solar heat’s gravity. The existential nature that functions in such a way in the happening of heat gravity, within the heat gravity happening of the Solar system, “the existence of many different natural structures can be learnt by us”.

In such a way, the heat gravity of the Sun, existing to be in a differentiated state in-between planets can be learnt. That is, for all planets within the Solar system, “the Sun’s heat by itself is giving heat and brightness“. The operation that functions in such a way, “does not distribute or exchange it with every planets in the Solar system with the same equilibrium, is that which is required to be learnt with clarity”. Reason being: “not only for the planets to whirl around keeping Sun as its center but as well, to whirl around in their own orbital path within the Sun’s orbital path, the Sun’s heat by itself becomes the fundamental source“.

In the formation that functions as such a source, why is there an availability of differences that happen in the gravity?: “The distance measures of the gaps in between Sun’s core axis and orbital path where it rotates about itself and as well the distance measure of the gap in-between planets’ orbital path is that which is indeed existing to be expansive gaps between the planet and planets’ orbital path by itself becomes the reason”. As a result of this, the Heat radiative waves that are expressed from Sun’s core axis to be spread on the Planets, in such a state, “the planetary rotational speed and 5 Grand elemental exchanges, rotational nature and the expression of movements……..”, in such happenings there are differences from one planet to another. The outcomes of such changes by themselves are the differences in the heat gravity between a planet to another in the Solar system can be learnt”.

If it is to be explained in a more simplified nature, “the heat that is expressed on a Planet and the air, water, gaps as well are not happening in the same way on every planets”. Reason being, the planets and the rotational nature that happens in a planet is being different, which is then creating changes in the Gravity. So, Only when learning the functional methods of planetary structure in clarity and scientifically, it will become possible to be understood. While conducting researches on Planets, it is necessary to research and learn the methods of the natural nature of the Natural structures functioning in joint along with the Nature and it is as well necessary to Research and learn their outcomes.