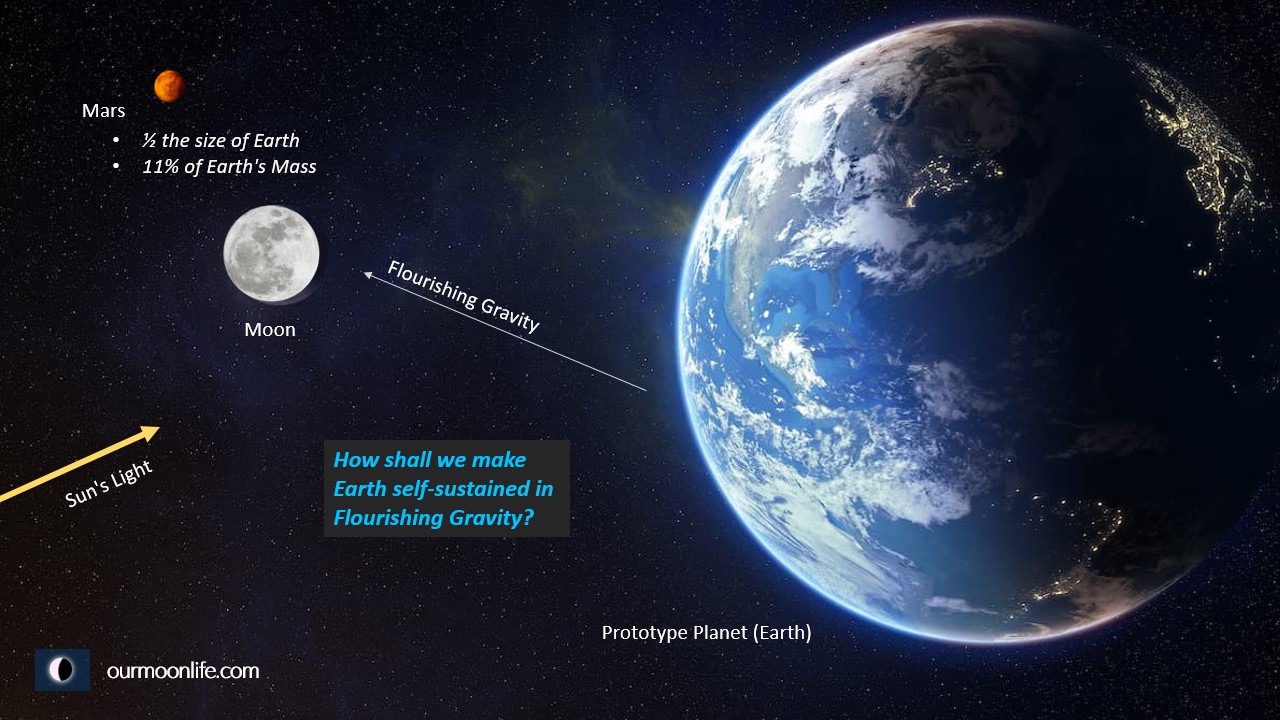 From the time period since human beings started living on the Earth to this day, if every livelihood happenings are closely observed: “In elements such as the ‘Livelihood Creation nature’, ‘Knowledge Creation nature’, ‘Culture Creation nature’, ‘the natures of inventions’ are all being in joint only with the Flourishing gravity in the Natural structure”. Until now, among all the Planets in the Universe, it is described that Earth is a ‘Prototype planet’ or Livelihood planet. The most important reason for this is fundamentally due to the fact that, “Water, Heat, Air, Plant and such ‘Life Natured Livelihoods’ are being in joint with the nature and as a nature in which all Five of the ‘5 Grand Elements’ functions in Unification“. In the state of 5 Grand Elements being in a Unified Nature, being existential along with the ‘Flourishing Gravity’ and only because it whirls (rotates) in the Sun’s Orbital Path, Earth is able to whirl through safely amid the innumerable Planets in this Universe. Only because the Earth’s Natural structure has attained being self-sustained, the Human being’s life is being a long and lengthy Travel.

If it is required to go beyond Earth to any other Planet as Life or Research then before that the Earth in Flourishing Gravity, should have attained self-sustainity. Only in the fully complete Natural Structure, “In the Planets such as the Moon & the Mars, that which exists to be a support to the Earth, will have its Natural structure give way for the Livelihood Researches to be conducted on it”. In such a way, when Earth is in a state of not being self-sustained in Flourishing gravity!, If Livelihood Research efforts are made by us, they will always exist to be in a state of not attaining completeness (the Researches).

The Necessity to describe it in this way is that, “For life to live on the Soil, everything such as the Air, Heat, Water has to be got from the Earth”. For all the Operational methods that functions in joint, under the Natural Structure, To attain (example: For functional use) the ‘Life Natured Livelihood Gravity’ that exists as the Nature Formula, “Only if either the ‘Life Natured Livelihood Gravity’ is changed to have Self-Sustenance or if it is being lived as a method of living will the ‘Life Natured Livelihood Gravity’ will exists to be as a method which functions along with the Moon or the Mars’s rotation in joint with Sun’s Orbital path”. The livelihood method that exists in this rotation, on its own, will make the Natural structure methods such as the Breathable Air, Rain, Cloud in planets such as the Moon or the Mars to have the pathway to be lived as a livelihood sustained Planet in the Universe, in a way such that, For Living!: “The ‘Universe Whirl (Rotational) Gravity’ being in joining with ‘Nature Livelihood Gravity‘ having it changed to a Life-giving Planet similar to Earth, in having all Laws (Natural Laws) joint with Sun’s Heat & Light Gravity and having the format of 5 Grand Elements functioning in Unification, such will the existence exist to be, can as well known!”.

If all of that which is required to be known, is conducted with the learning of all the livelihood formations in the Earth, then not only on the Moon & Mars but beyond to the ‘Jupited & Venus’ and even on the Sun, the researches can be conducted. These methods exists as a ‘secretly intertwined information in an interestingly complex way (Sootchamam, Source Tamil Language: சூட்சமம்) of a Nature Law‘ in Nature. Hence, lets get to know the ‘Nature Laws‘ and “Come! Let us change the existential state of the Solar Family (Solar system) into a human family and live in creation of new pathways”.