In this Universe in which we are living in, there are innumerable Planet structures that are being in the state of existence in Unification through 5 Grand Elements and with the help of ‘Universe Gravitational Strength’, it also exists to be in a way of whirling (rotating) around naturally. Every single planet in the Universe is being structured naturally in being both small and big by the Five of the 5 Grand Elements. Only with the help of the 5 Grand element’s Gravity, every single planet in the Universe is whirling (rotating) around in Gravity that which gravitates and whirls Forward-Backward. Though all of the planets in the Universe is structured in the state of 5 Grand elements being Unified, a few planets alone are in the type where all of the 5 Grand elements functions in Unification. The planetary structure that exists in such a way can be described as a livelihood planet or a life-natured Planet. Such a Planet is existing to be a planet that functions completely in the Universe. 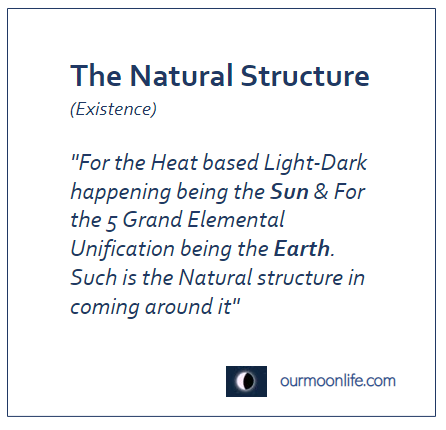 To be as a planet that lives based in focus of ‘Life natured Livelihood’ and whirl (rotate) through in space, Earth prevails as a planet of Life-Nature’s place of stay indeed. As it’s based on ‘Life natured livelihood’ Sun comes around it, due to the same reason and other planets as well revolves around the Sun. Such is the existence of it in the Natural structure. Hence, if humans plan to live anywhere else beyond the Earth in this Universe, they can make their efforts in a livelihood format itself if the planet is the unified existence of the 5 Grand elements or the 5 Grand elements are made to be Unified on the Planet. If this effort is only to be made beyond the Earth? (as there are life natured efforts that are to be conducted from Earth), in the current time period, the researches and efforts are being conducted to live beyond the Earth, currently. In it, as the first effort, the Planet Moon is being the one.

The existent water in the Lunar surface’s inner structure, if it is bought to the surface and utilized, it will become a ‘Life natured planet’ or a ‘Planet of Life’ in a complete existence, through the unification by the 5 Grand elemental unificative methods. Beyond the Earth, continuing from the Moon, as our researches are towards Mars, it is possible to create ‘Life natured livelihood’ on the Planet Mars. The reason is, as the fundamental necessity of ‘Life natured livelihood’ on Mars: there exists Air, Heat, Water, Day-Night time period, and such elements. At the same time the method of ‘air rotational speed‘ exists as a blocker to the Research nature on Mars. To correct this, through the 5 Grand Elemental unification, if the Moon is made to be changed in existence, then the ‘Rotational method’ that is expressed in the Moon’s Planetary rotation method will gravitate the Air rotational method that is expressed from the Mars towards itself and the happenings of it in utilizing the ‘air rotational speed’ for its heat correct, will come into existence.