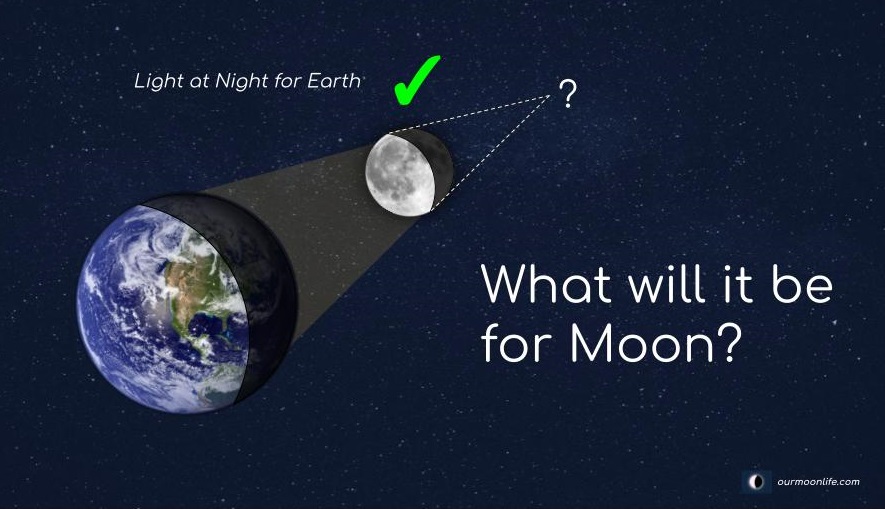 On this Earth we live in, since the starting time of the Human being there is the Day – Night Natural structure happenings continuing continuously. In it, for the life formation and human beings that live on the day light: We know, the Moon exists to be the beacon of light and the navigator through light at Night. We are assuming that, in the nine planetary formation that revolve around the Sun, there is the happening of the Day – Night cycle in the Natural structure on all of it. But for the very first time, only on the Moon there is light in Daytime and there is no light at Night. That is, it’s dark. In such a way, observing one split half as daytime and the other half as night time, is possible to be observed only on the Moon. The same: On a particular day (24 hours) of Earth, one part exists as daytime at the same moment other part exists as night time. That is, it will be filled with darkness (New Moon day). The same happening on the Full Moon day can be seen as presenting itself as Day & Night on Earth. We are observing brightness and a dimmed brightness. That is on the same moment the observation of complete Darkness and complete brightness cannot be seen on Earth. This happening on the Moon exists to be that, one part is bright and the other part is dark, at the same moment. The reason for the natural structure to exist in such a brightness and darkness on the Moon is only due to the Moon’s rotational operation.

Similar to the Moon that is available to give brightness at night for the Earth, there isn’t a single planetary structure or a support planetary structure available for Moon until now. Only due to this on the Moon at night it is presenting itself with complete darkness. At the same moment, if the human society is to exist through out the entirety of the Universe then, every single planetary structure (planets and support planetsNatural Satellites) in this Solar family should indeed have a planet or support planetNatural Satellite to provide light at night. If not: Then, for us to create the happening of shedding light at night, the natural structure correction should be created with the required use of grand naturally natured intellectual strength of the Humans.

The Natural structure methods that makes the Planetary Rotational nature to function is required to be corrected. Only in this method, the creation of the rotational nature that will give light to the Moon at Night and the knowing of the 5 Grand Element’s Natural structure method and the Natural Natured method that will operate it as well: “Come, Let us together execute it!”.

“The planet that will give light for the Moon at night: Is it the Venus?”, to know, if it will be another planet. “Come let us correct the Moon’s Natural structure and learn it.”