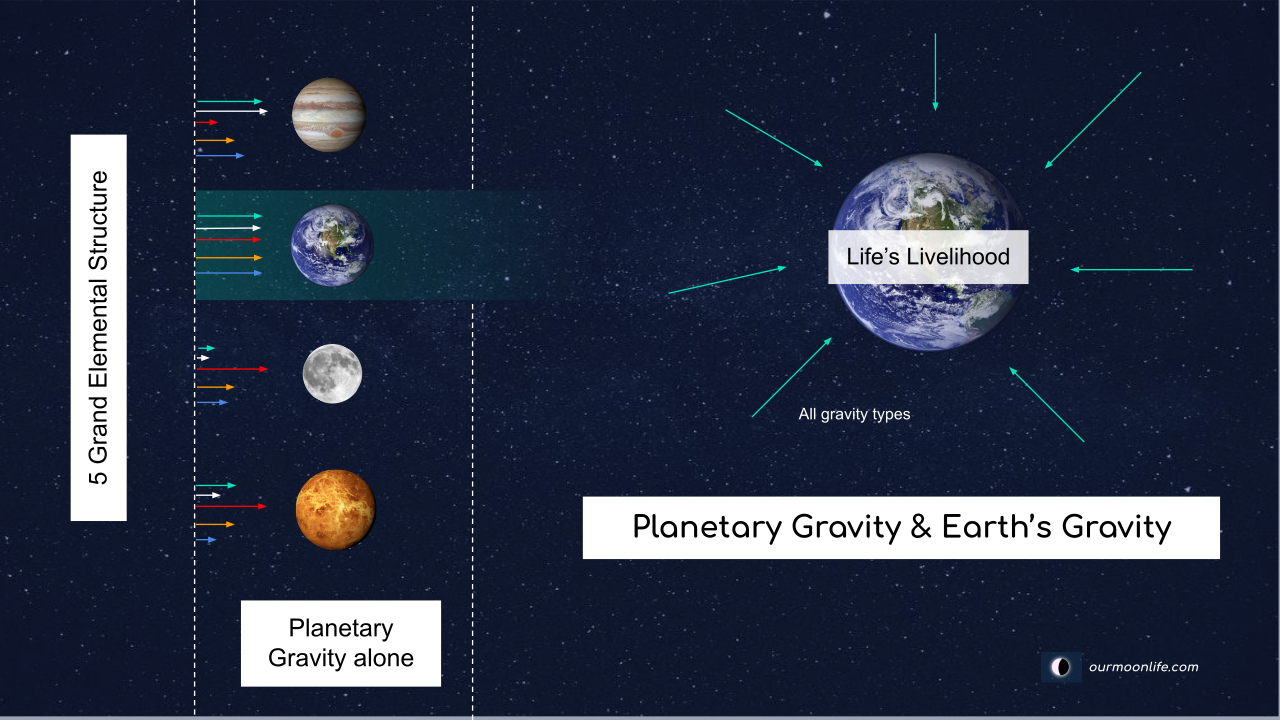 In this Universe, we are living in, “every single planet in the cluster containing billions of planets, is functioning based on the focal point of Gravity in the 5 Grand elemental unification”. Every planets in the entirety of the Universe are functioning based on the 5 Grand elements. At the same time, in the existence of the planetary formation that utilizes the 5 Grand elements, “it is being different from planet to planet”. As a result of this, there are many differences and conflicts in the time period pertaining to the rotational operation and the day-night time period. Further, as a result of this, “there is a difference and conflict from one planet to another in its planetary rotation gravity and planet’s gravity”. In the planetary existence throughout the Universe, “Only on Earth, the protective features and every type of structures are existing to be different and completely unique”. The reason for such an existential nature is only due to the nature of the Life’s structure.

That is, on the Earth’s operation,

In such a happening is the existence of Nature.

Adding onto it, “it is existing to be a prototype planet in the Universe’s planetary structure”. The reason for that is: “Getting to know the Human knowledge’s grandness, is also with the same intellect that exists in a favorable state towards the learning of Earth’s natural structure. That is, the learning of the Life’s livelihood on the Earth’s structure or the same intellect which can correct any planetary structure to the state in favor of life’s livelihood or If we are to create life’s livelihood on any planet on the Universe with it”, If we know that, this existential nature of knowing this, is existing in a nature of getting to be realized. It will become possible to learn every connection inbetween Earth’s gravity and Planetary gravity. It will become possible to realized, why Earth is called a prototype planet. To create life’s livelihood, let us show the way forward in happiness.

Hence, the gravity on the Earth is that which is on the upper surface of the soil and inner surface of the soil through the plant lives growth. This continues onto every structures on Earth, as an in-out & out-in gravity and as well through the happening of the 5 Grand element’s joint operation: “Every necessary gravities that are required by the Earth will join in a state favorable to life’s livelihood as well”. It is also existing to be a gravity that joints it. As all of these gravities are functioning in an unified way on the Natural structure: “The Earth’s core axis operation is functioning in a easened state”.

As there isn’t a similar happening that are in connection with the nature on other planets apart from the Earth, “It is existing to be a possiblity to learn about the Planetary gravity alone on that planetary structure”. If the operations of the 5 Grand elements unify and if the life’s (plant life + living beings) livelihood evolutionary structure becomes created, “It is certainly possible that every gravities similar to that of Earth will be formed on every single planetary structure in this Universe can be learnt scientifically”.