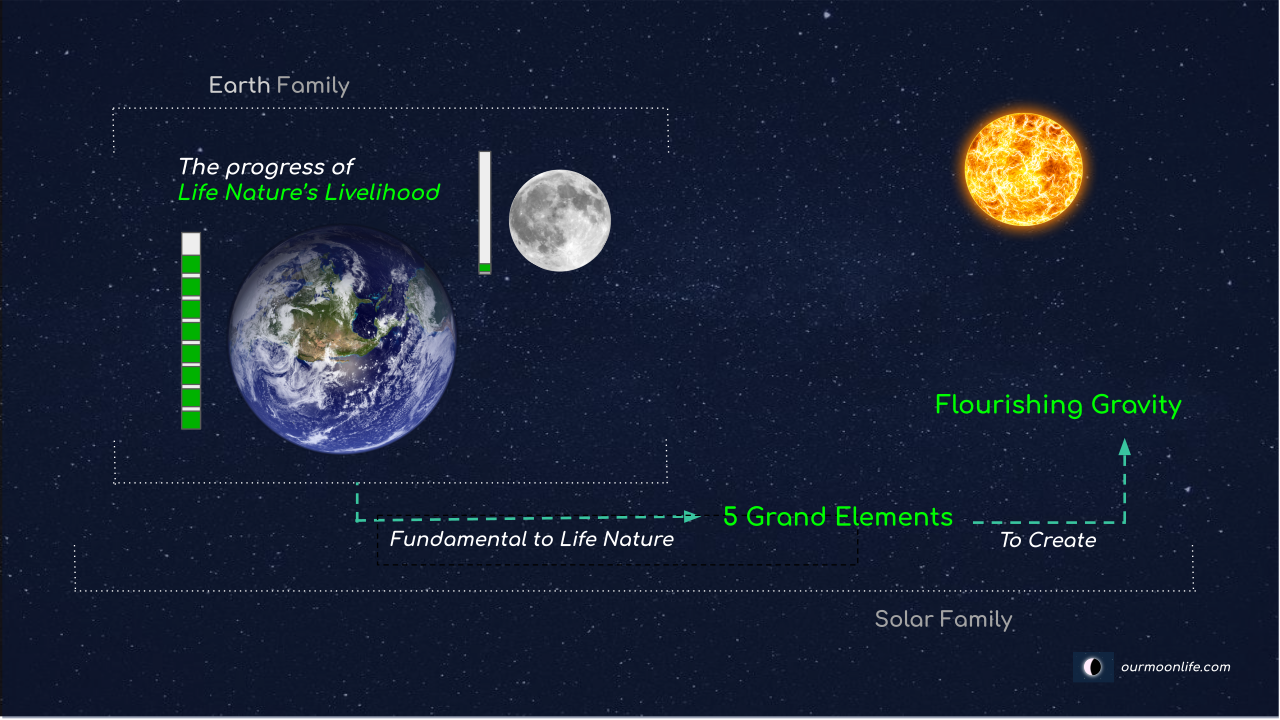 In this Universe we live in, there are innumerable planets. In the Planetary structure, specific few planetary structures are being as family structures in clustered rotational-operation method in existence. In such an existential rotational method, there are conflicts in the whirling time period. In the Planetary rotational method, the method of rotating around itself, in the method of revolving around it’s orbital path: There is the existence of conflicts in elements such as the rotational time period, in the rotational method and as well the Nature’s natural connection measure’s methodics. Such is the way, is it’s existence throughout the Universe. This Universe we live in, “Is made of 5 Grand elements”. Only if this is known in fulfilment, with completeness and with clarity: will this phenomenal truth come into understanding.

That is, the functional activities of 5 Grand elements on every single planet: “Only when it exists to become an existence of natural natured existence, that functions in join with one another, is then the Natural structure on the Planet is forming to be in equilibrium”. At the same time, on that Planet, for the Life natured livelihood to be lived as a life format, and as well to be made as a method that gives life, will this (Joint function of 5 Grand elements, naturally) exist to be the rightfully supportive existence. The fact this can be known in a natural natured way can be known in an intellectual way.

Hence, to create Flourishing Gravity on the Moon, it is required to learn the existential state of Water on the Moon and by joining with Water purification method, it is required to created or to be utilized in the natural structure where one joins with another on the Moon’s upper soil surface and the inner surface. At the least in this method, it can be learnt in a scientific way that this is the rightfully fitting method for the Natural structure method of the Moon to “function” or to be “made to operate“, similar to that of the Earth’s natural structure. This Flourishing gravity by itself will create the state of equalized heat-Cold in an equalized way. It is as well possible to learn that, Clouds, Rain, Planetary rotational nature, Day, Night, Breezy air, Breathable air and such elements can be obtained in completeness on the Moon.

Not only stopping with that, but only when the greatness filled truth of the Water’s existential state on the Moon is learnt and executed with clarity, can we perform our required researches in fulfilment on the Moon.

The activities of ‘Flourishing gravity’ will not only be an aspect in creating life nature’s livelihood on the Moon, but it will exist to become a fundamental source structure for creating life’s livelihood on any Planet within this Universe. This can be learnt with clarity and scientifically.

When what is required to be known, is learnt in a scientific way, it will exist to become a grand support and core support for the Life nature society that exists throughout the Universe. This can be known.