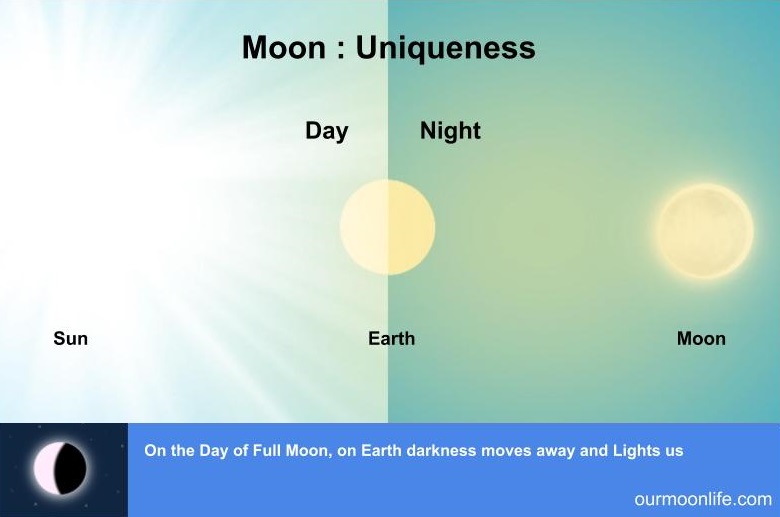 “On the Day of Full Moon, Brightness fills with Darkness moving away on Earth,
For Moon’s Uniqueness this by itself is first proof”

Light:
Every millions of Planet in the Universe has the “nature of giving light”. Planet’s Color has within it many Colors and characteristic nature is what we know.

Light’s Color:
All the millions of Planets are formed within the seven type of colors. Each Color have a characteristic nature to it, is also what we need to know well.

When observing from Earth, both the planetary bodies, Moon & Sun are bright to the extent of seeing with naked eyes. In the day Sun’s light and in the night Moon’s light can be seen.

Sun:
The Sun’s very high brightness is contributing and helping with its light and heat to it’s family (Solar family). Hence, the planets & supportive planets in the solar family are utilizing it for their operational activities.  Only by utilizing the source energy within this Sun light’s nature every “Micro organisms” on every planet are living, is required to be known.

Nature Greatness:
In which planet the Sunlight’s “Moderate heat, brightness” is an outcome. In those planets natural structure is formed in a stabilized (correct) way is required to be known.

Livelihood Greatness:
In which planet the Natural structure is formed in a stabilized way in those planets “the fundamental structures required for the Life’s Livelihood can be created by the human beings” is required to be known.

Moon:
For us living on the Earth inside the Solar family, that is, Earth’s supportive planet has happened to be the Moon.

Moon makes it’s light and heat to be brightened during the night. Even if the Moon makes it’s light, heat to be brightened during the day, it is not being possible for us to feel it on Earth. Not only that, but Moon in it’s nature of giving out light has formed in the way of having a changing nature. This happening is, the time period changes created in the Moon taking time for it’s rotational nature. That is, Earth’s rotation time period is 24 hour period. Moon’s rotational time period is 28 day period.

Only the Light’s nature change created on the Moon is becoming the New Moon, Waxing Moon, Full Moon, Waning Moon happening and Time periods. Is what we are currently knowing (learning).

Nature’s Greatness:
The Moon in it’s Light’s Nature (Waxing Moon, Full Moon, Waning Moon), and heat (Nature of Cooling) is being very helpful and right support to the Life’s Livelihood on Earth, is what we know.

Moon has formed in the nature of helping the people in a connected state with it even if it cannot be of help to itself.

For so many period of time, till now, the Moon that is being of help to the Earth (living beings, plant lives, human beings), let us help it.

Let us make the Moon,

In the solar family Moon has always been the supportive planet of Earth. “In every livelihood nature that is to form (Every planets except Earth, Moon), Moon by itself becomes the scientific Guidance planet”, this will become the state is required to be known.

For the Scientists that have been conducting Researches for many years and making humans and living beings live. Let us celebrate and rejoice with a “thank you, festival” on the Earth and the Moon for giving the opportunity to live on the Moon.

“Let us announce it to the entire Universe”

That, The human beings that lived on the Earth, let the way to live on the Moon. Hereafter, this will will continue through the Universe.

To Continue, to become a continuation, Greetings Everyone one.