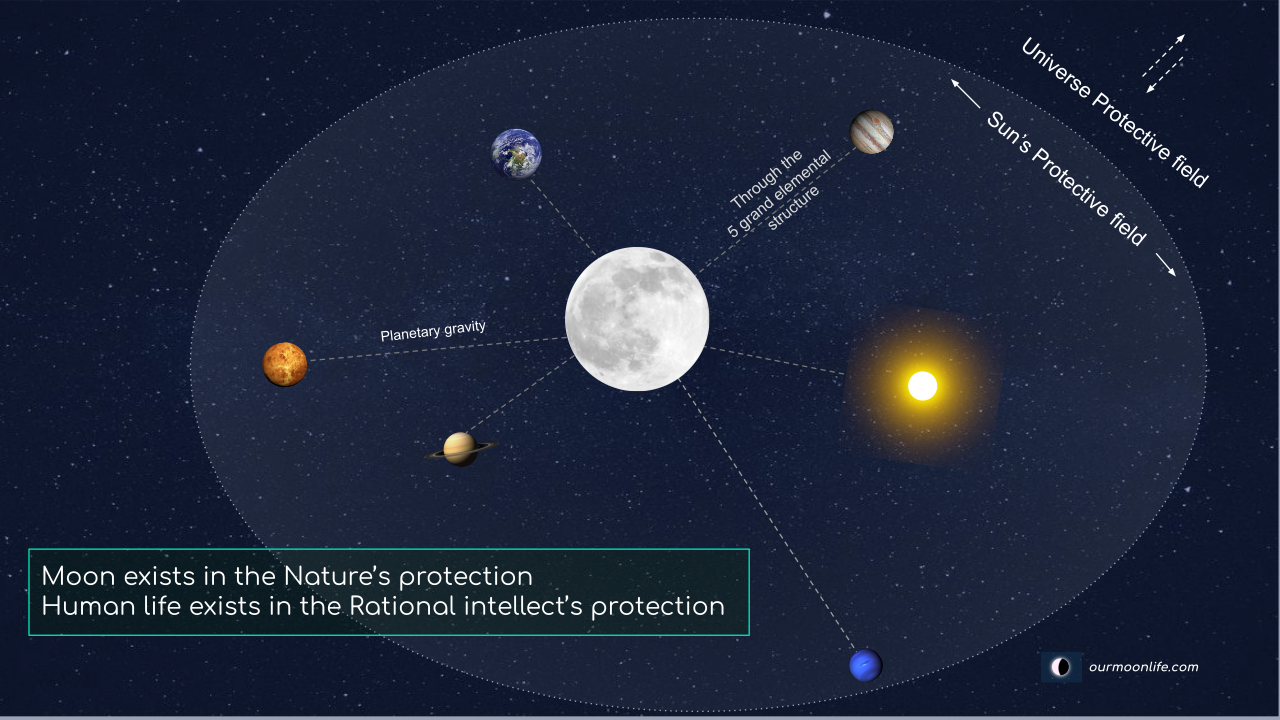 In this Universe we live in, there are innumerous planets and support planetsNatural Satellites. In it, we are continuing to live on the planetary cluster formation that whirls keeping Sun as its center. In the Solar structure where we are continuing to live, the structure of the Earth is existing to be as |Day-Night|, |Heat-Cold|, |Light-Dark| structure within that planet’s planetary protective field support and with the Universe core axis support as well, in the Universe orbital path, within the Universe protective field: in the Sun’s core axis the planets are in their orbital path in their rotational time period with the help of Sun’s core axis, within the Sun’s protective field, every single planet is whirling around its orbital path in a rotational structure. Now the time periods in such a whirling rotational method – “The happenings that are created by the method of functioning by a planet with the planets, while being joint with the 5 Grand elemental structures”, have changes being in creation. As a result of this, the methods of planets rotating about themselves and the rotational changes that are created by the speed values and the changes that come into creation in the planetary gravity, all of it by themselves are creating conflicts in the Natural structure method of the Moon. As a result of this, the conflicts that are created in the Planetary gravity is being created in the in-out, out-in rotational operation gravity on the Lunar soil as a reactive conflict, “resulting in an affliction of the Lunar gravity by the destruction of the soil’s core fragments caused by the electromagnetic waves in the heat of the Morning Sun”. Adding onto it, the required gaps for the Planetary rotational operation and for the required distribution on the Lunar soil, the necessary amount of gap formations are becoming reduced. In such a way, the required gap formations for the 5 Grand elemental operations having to be reduced is making the Moon’s rotational operation reduced. As a result of this, there are huge conflicts that are being created in the Day-Night rotational time period. Only because of this, there is the creation of waxing and waning on the Moon.

Further to it, through the conflicts that are created in the rotational time period: “There is intense cold at night and intense heat in the morning that which makes the Lunar soil weakened, which is then resulting in every structures that are required for the life’s livelihood creation are as well being conflicted”. Hence on the Moon, it is existing to be such that, the state of soil in the morning heat and the state of the soil in the night’s cold, cannot be stepped on. Hence, it is being extremely complex to conduct researches on the Moon at day and night time.

Adding onto it, “that which is the water source structure on the Lunar soil”, as a result of planetary rotational operation conflicts the water in the deep parts of the soil remains put in stagnation within the water reservoir sources with the inward gravity help in the inner part of the soil surface and as well on the inner parts of the soil as well. This results in the creation of the happening where it is not expressed on the Soil’s upper surface. As a result of this, the livelihood happening favorable to the Microbes, Plant lives, and the living beings to live is being completely blocked. The conflicts that gets created in the Heat gravity and as well the Cold gravity is changing the fundamental actions that are favorable for the life’s livelihood living on the Moon are being in a format that is in favor of complex existential nature.