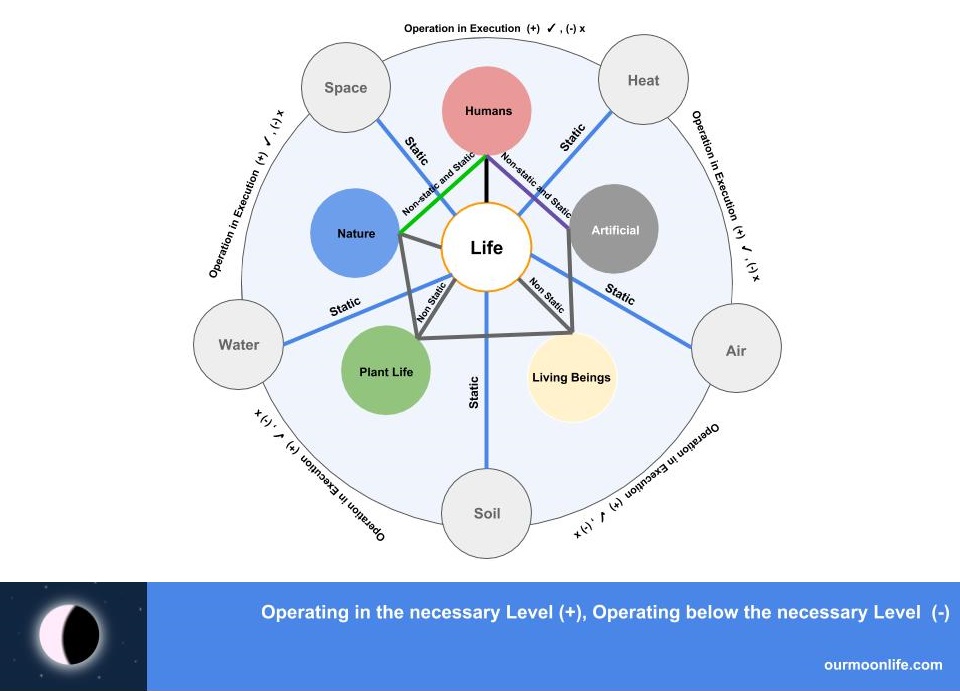 Five of the Grand Elements are prevailing to be the fundamental source formation for the activities of the Five joining together to function, operate.

in such two types, has the Life (Life’s source blocks) formed to be. The formation methods that which functions (To Function, To Operate) in joint with the “Life” that exist to be a support, a pillar to such Evolutionary Growth Nature (That which is in in-constraint, That which does not come in-constraint) is what we call as “Static Life, Non-Static Life”.

Example: Moon. If we observe keenly onto the Moon (Planet) structure: Water is available but Rain is not. The Water on the Moon is in a state that it cannot be utilized directly (As Drinking water…….).

Example: On the Moon there is Water available, It is becoming evaporated. But the Rain did not fall, why…… (Do we know the Reason….. Come, we know of it)

Earth:
On Earth the Static Function – Functioning in Operation works are happening naturally in itself. Hence Live-Life Livelihood is existing in fulfilment on Earth.

Moon:
On the Earth the Static Function – Functioning in Operation works are happening in a very very reduced nature. Hence on the Moon, in the Work of the Static life functioning, the operational work will need to be created by ourselves.

“As the Operational Nature belonging to the connective strength between Static Nature – Non Static Nature, it has formed to be the ‘Life core formation as the source reason'”

We will get to know more about Five Grand Elements.