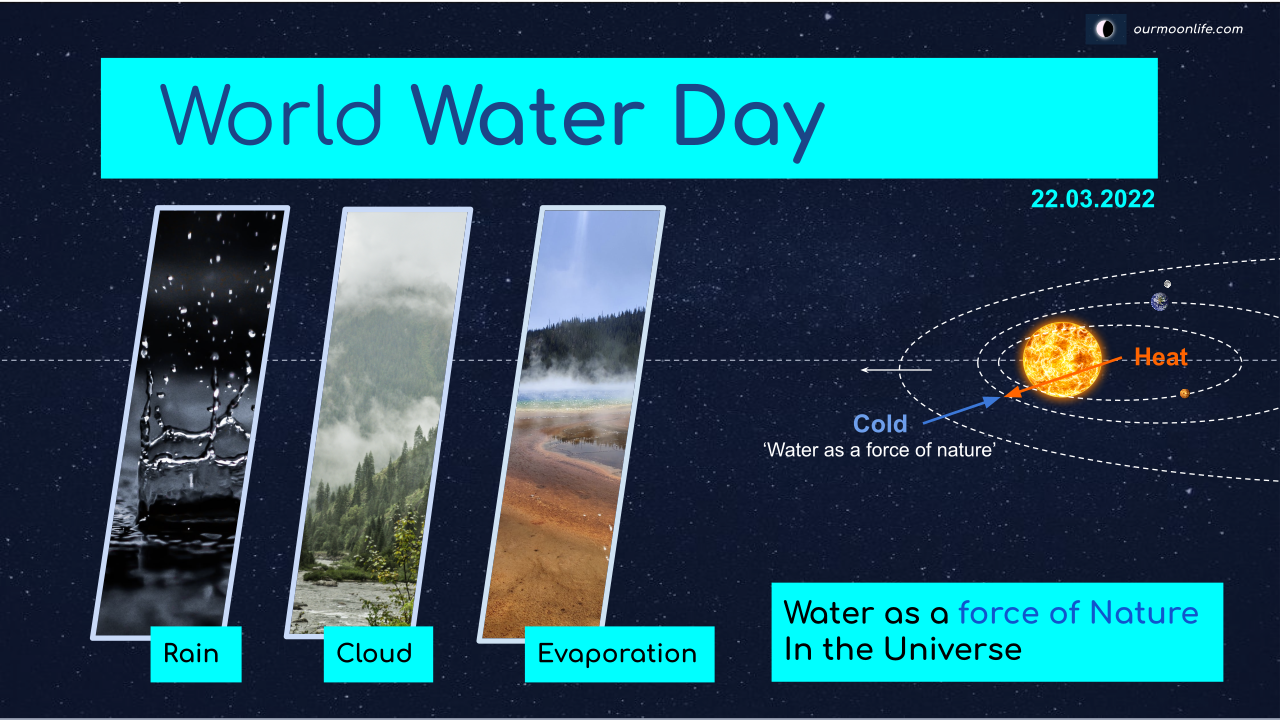 The Universe in which we live in, has naturally got natural structures in a very expansive state of magnificence. Universe structures are existing to be in a format of functioning and operating through the 5 Grand elements (Space, Heat, Air, Water, Soil) being joint. This Universe we live in, is functioning continuously through Heat (Heat: Light – Brightness) strength in a rotational method. In it, the Universe rotation is existing to be through the methods of Five Grand Element’s 5 type rotation (Space Rotation, Heat Rotation, Air Rotation, Water Rotation, Soil Rotation) and through Gravitational field strength, it is existing to be a functional & operational method of being joint with one another. For the 5 of the Five Grand Elements to rotate as the Entire Universe and function, it is water in itself being used as 1 in 5 portions. Similarly, every single planets in the Universe to rotate and revolve around it’s orbital path in a easy way, the Water’s operation and the Gravitational field by itself is being the priority. Not only that, but for the Universe’s natural structure, Flourishing gravity’s importance, Plant Life, Living being’s and Human livelihood’s life structure’s life & elevated pulse: “To have been existed in this state, Water by itself is being it’s own proprietor and worker”. On top of all this, for the Universe’s operation to exist in an equalized state on the Heat-Cold and then to whirl around, in the influence of the Gravitational field: “Water by itself is existing to be the priority”. To understand these greatness filled truths, the proverbial description that goes as, “Even if you insult your mother, don’t insult water”, is not to encourage insulting or complaining a mother, but to describe the scale of Nature’s importance to the Life natured livelihood. This is required to be known with clarity.

Adding onto it, the proverbial statements such as, “without water there will be no formational existence of the World”, “With water is the existential formation of the World” are described to instill the way of living through the knowing of water’s importance. This is required to be understood. If it is to be described in an approximated nature, “similar to how there is three-fourth portion of water on Earth, there is the existence of three-fourth portion of water’s strength in the Human body life structure”. Not only on our Earth, but on every single planetary structure in this Universe, there is Water’s structure in the Nature for the Life nature’s livelihood. This as well should be understood. It’s a necessity.

If water’s greatness, is to be described scientifically, “The toxicities in factors such as Oxygen, Breathable air of life, Carbon, are to be corrected naturally in nature. It is mainly done by Water’s strength utilization on the Natural structure”.

If this by itself, is to be described through the “True Wisdom” sense, “The toxicities in all of the Five, in the Five Grand elements is corrected by Water in itself”.

That is: “Not only in this Earth but the toxicity in the Soil, Water, Air, Heat, Space that are the Five that exists on every single planets in this Universe is corrected through the nature of Evaporation, Clouds, planetary rotational nature, revolution around the whirling orbital path while rotating on the core axis, life nature’s livelihood utilizations and the Universe Gravity’s nature”, thus continues the activity of correction, every second, continuously.

If that which is being learnt comes to be known, If life is to been lived in the knowing, it is possible to become a guide (or a mentor) to every living humans. “If this happens to be, then Water’s greatness can be known”. The Life natured livelihood that which is of magnificent greatness. Will be lived happily, come!.

If the Life natured livelihood or the human livelihood is to be created on the Moon similar to the existence on the Earth, then by knowing the Water’s existential state and knowing the water utilization methods on the Moon’s Soil: will we have the Research methods and living methods happen to exist in a simplified way. This can be known.