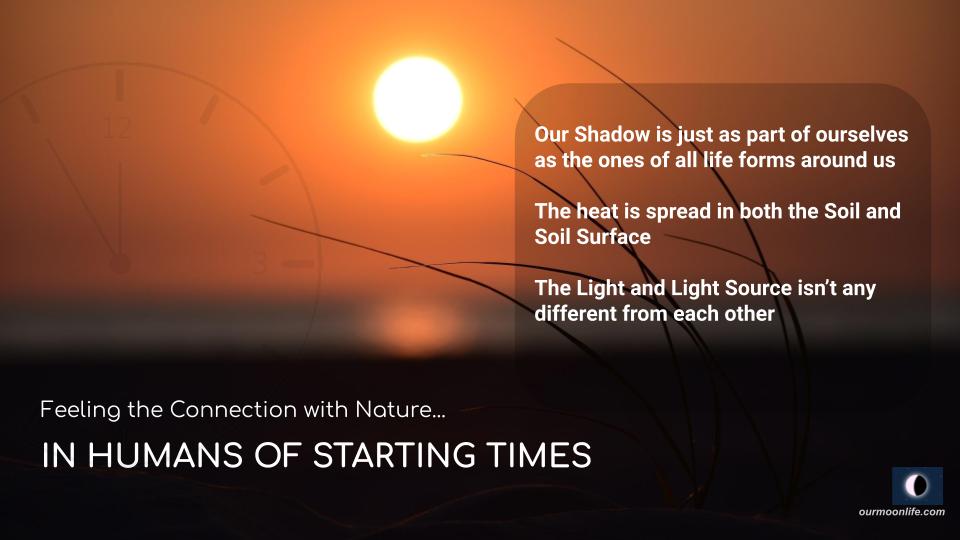 In this Universe we live in, for the Living beings, Plant lives, Human beings to live, the Planet called the Earth has existed to be the primary source, so far. In the beginning times of the Human being, if that which existed to be the livelihood expression, guidance, then it will be the Sun by itself.

That which gives Light and Heat as lending help, To the Earth that exists in the Solar system, is the Sun by itself. Similarly, at night, that which gives Cooling and Light and lends its help, is the Moon. Both structure’s greatness filled Truths is existing to be a well known expression of the present time period is what we know. But this; the existence of these states in the starting times of the human beings, do we know of it.

The human society in the beginning times.
* What needs to be done
* which of it is required to be done
* How is it required to be done
* For what it has to be done ……….
any such things are not known.
At the same time, when observing every activities of the Living beings, the feeling of having to do the same, kept motivating them. It even made them do that activity. This is what we are describing as ‘starting stage activity gravity’.

Knowing Heat:
In the starting state in which Human beings lived on the Earth, the hotness given out in the heat (Sun’s Heat) in itself gave the opportunity belonging to the movement. Do we know of this!

Knowing Breeze in Shade:
The happening that which came to be known when ‘Human sought out for the Shade to avoid Sun’s heat’ is that in the places where Shade is expressed ‘the heat’s strength is becoming reduced’ was possible to be known. Adding on to it, In places where shades of Plant lives was expressed, they felt the flow of the breezy wind as well.

The Strength of withstanding Heat:
When reaching out to the Plant Lives to be released from the heat influence of the Sun, the Plant lives gave shade. Through this they realized that Plant lives have the strength of withstanding heat. That is, on the top surface of the soil and within the inner surface of the soil, the plant lives that have created their livelihood, came into their knowledge. At the same time, it was possible for the human beings to realize that the Heat is becoming spread in vastness, both on the Soil and the Soil’s upper surface. Then they also understood that the Plant lives are also standing on the soil by withstanding the heat.

Knowing the Figure of Shadow:

Humans came to know the existence of ‘a figure’ similar to that of the Plant Lives, Living beings, in the places of their availability. If it moved, it as well is moving. If it is not moving, it as well is not moving. It is being together with it. For the human beings, while seeing the figure that was joint together with the object, “the staggered sense that came to be with it”, what can be told about it!: “Is this state only in the Plant Lives? or is this state only in living beings?”, when this was keenly observed for understanding, It was possible to be known that, it was joint along with themselves when moving and not moving. A longing for knowing the reason for this came to be.

First it was felt that, the Sun’s Light is the reason belonging to it. In one situation the shadow figure that appeared on one side, in another situation, it appeared on another side, only then, it was felt to be researched that whether the reason for it: was the light moving? or the figure (Sun) which is being the reason for giving the light?. As a solution to it, the humans came to know that the Sun and it’s Light is not different, which is what came to be. For this happening to be proved the Moon’s Light came to be.

At that time, the humans made the effort of trying to know well of the situational formations in the Sun’s light happenings. That is, at that time, the way of fulfilling the required needs for themselves, they started attempting at knowing it well and then taking actions.

Come, Let’s get to know more.