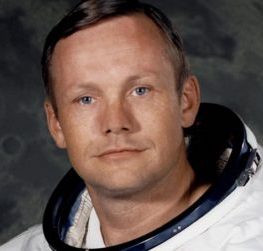 On July 20, 1969, American astronaut Neil Armstrong stepped off the lunar landing module Eagle, and became the first human to walk on the surface of the moon. Nearly 240,000 miles from Earth, Armstrong spoke these words to more than a billion people listening at home: “That’s one small step for man, one giant leap for mankind.” Armstrong died on August 25, 2012, at age 82.