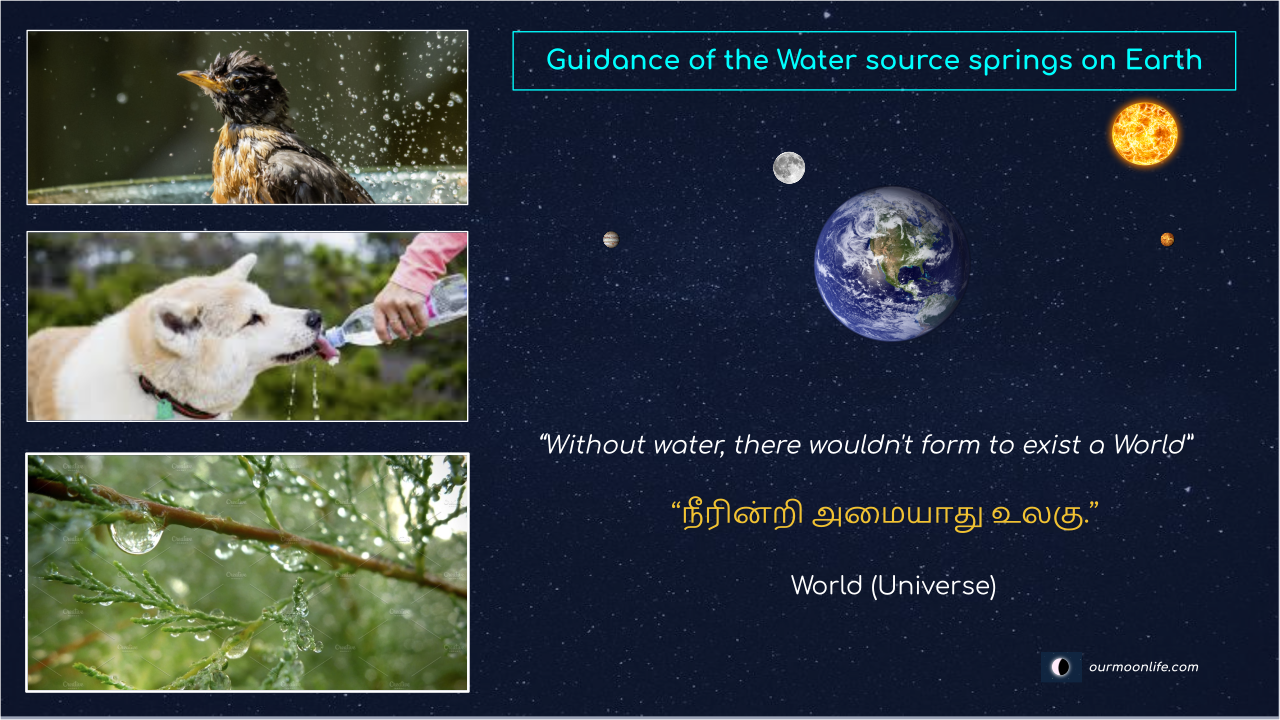 In this Universe we live in, there are innumerable planets and planetary structures that are existing in the Universe gravity in a rotational method. The planetary structures’ operation is that which is being organized in the natural structure in the method of functional existence in being joint with the 5 Grand element’s structures. Every planets that are organized in such a way are existing for the life’s livelihood is required to be understood by us with clarity. The reason being, we human beings are indeed only living on the Earth structure among the planets in the Universe. For us living in such a way on Earth, “why is there the necessity of the intellect to be expressed regarding the Universe?”, this should be observed keenly. In the Natural structure called the Earth in which we are living, “the existence of life-natured livelihood continuing to live around us and if we get to know the necessity of us requiring to live in joint with the life-nature’s livelihood, then many truths will come into understanding”. That is, while observing the living beings living on the land and water, the reason why the thought and action that comes with it in the form of, “We as well need to connect with the land and water”, comes to be so. Only if we observe this existential nature, can we indeed realize the existence of the situation where we are in the need to live being in joint along with Nature. Adding on, by observing the living beings connecting with their connections through the connections available in the Natural structures, we as well are connecting in a similar way or in a way, very much close to it being a continued event, this exists to be a the happening. In such happenings, the continued method and that connection’s experience is that which has only become formed in the methods of every connections in our life connection, in it every aspects of the natural structures and the connections in it, that which is existing to be a nature structure, natural structure and as well in the method that which goes beyond these methods, it came to be(the continued method and the connection’s experience formed to be).

Among the 5 Grand elements, only the Water’s structure being very very important was learnt by human beings, this learning made the eventuality of bringing the 5 Grand element’s natural livelihood towards their location as an experiential nature and in a natural way which was the outcome of a meticulous knowledge growth that was created for the Water’s need and the mineral resources that was depended on it (liquid, gas).

That which became the information that was learnt through this is the, “Without water, there wouldn’t form to exist a life natured World”. Which is a magnanimous livelihood secret.

That is the reason why it became the magnanimous effort in bringing the water within the inner surface of the Earth to the upper surface of the soil. The 5 Grand element’s connections throughout the entire Universe is being

Hence the entirety of Planet’s operation and the entirety of Planets’ operation, ‘the water source in the 5 Grand elemental connections’ is that which is existing only for the Life natured livelihood in the Natural structure in a natural method as a direct and indirect structure. If the human’s livelihood is to become existed throughout all planets in the entirety of the Universe, then it is required to realized in an intellectual sense that there is water in all of it. In whichever planet there is water in an indirect existence, in those planets the water source reservoir is available in the upper and deep structures of the inner surface of the planet, is required to be known. On any planet, if humans are to conduct researches scientifically then for it first, there should be exchanges pertaining to the unification of the 5 Grand elements should be available. If there isn’t such an exchange of the 5 Grand elements, then in that planet, there isn’t a possibility to see the water source is required to be known with clarity. Hence, we humans who have given forward by fulfilling the human livelihood needs in learning the water on Earth and as well the water source springs. Similar to that, if we get to know the format of knowing the water source existential states on every planets and as well know the format of knowing the methods of 5 Grand elements unification: “then it is possible to create life nature’s livelihood on any planet in this Universe, similar to that of the existence on Earth”, we know of this.

If that which is getting to be known, is got to be known in a scientific way, then it is possible to create human livelihood throughout the Universe. It is possible to create plant lives’, animals’, microbial lives’ and as we living beings’ life throughout the entirety of the Universe and so this Universe we live in, can be made as an entirety of flourishing expanse. We know that this Universe can be made as an entirety of heaven for life nature’s livelihood. Come let us learn further.

For the Universal Planets, that which exists to be a lifeline for life nature’s livelihood is the ‘getting to know’ activity of the water-source-spring happenings by itself on each of the planets in which we are thinking of living. This act of getting know by itself being a scientific ambition and then getting to know, will be the creation of human livelihood throughout the entirety of the universe.